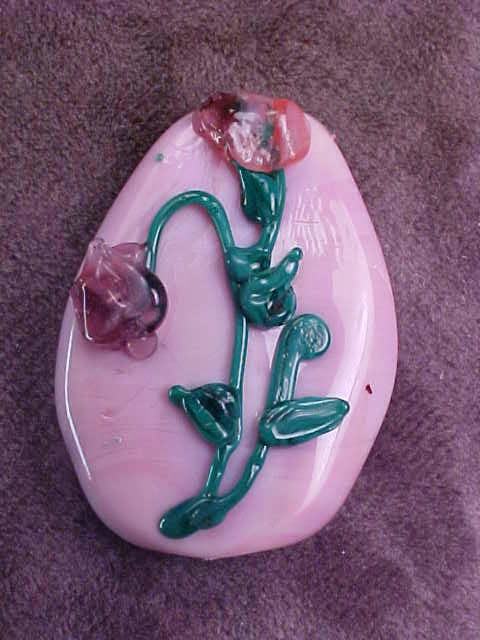 The word oval means egg shaped or egg-like in shape. A geometric oval that is shaped with both points at each end equal (as opposed to a real egg in which one end is broader than the other) is called an ellipse.
An oval with a line inside it at one end was used in ancient hieroglyphics to surround the name of the Pharaoh. This oval was inscribed on an amulet that was worn by the Pharaoh. It came to signify good luck and eventually was worn by other people.
In architecture one of the earliest known religious temples was one with an oval floor plan found in Mesopotamia at Khafaja, Iraq which is believed to have existed around 2700 BC. In ancient Rome, amphitheaters were often oval shaped.
As for the oval shape in jewelry and beads, perforated egg shells were used in jewelry in Pre-Historic times. Later with the advent of civilization, ovals were found in jewelry made of various materials.
The oval shaped lampwork glass bead pictured above was handcrafted by the Beadshaper. You can see more of her work at Beadshaper