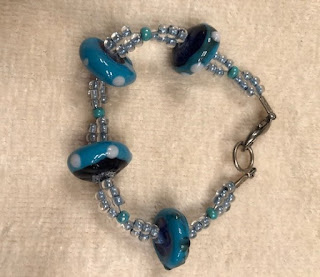 Blue was once considered a hot color but is now considered a cool color. It is found in the flags of many countries and is the color of
blue jeans. In the Turkish culture it is the color of amulets worn to ward off the Evil Eye. It now is often associated with sadness as in one is feeling blue. There is a type of jazz music which is known as the Blues.The Egyptians created blue pigment from cobalt thousands of years ago and used it in glass making. It was subsequently used by other ancient civilizations. Later it was perfected in glass making in 18th Century Europe. Azurite was discovered as a source of blue pigment in ancient China and spread to other lands. It became popular as a color in medieval European paintings.Indigo was developed as a blue dye in ancient India. It spread through the Far East and across Asia to Greece and Rome where it was given the name indigo because it came from the East.Ultramarine was a pigment first developed in Afghanistan during the Middle Ages and later was used in Italian Renaissance paintings. It was very expensive because it was made by grinding up lapis lazuli semiprecious stone.The first manufactured blue pigment was Prussian Blue which was created in Germany in the 18th Century.
Click www.beadshaper.com to visit the Beadshaper web site.