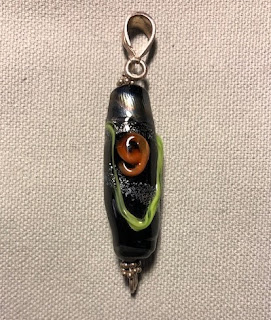 The number 9 is more than 8 and less than 10. Nine is the square of 3. That means if you multiply 3 times 3 you get nine. Nine is the highest single digit number. In some forms of mysticism 9 has been called the number of magic, of completion, of wisdom, or of heaven. Nine represents Brahma in Hinduism. The ancient Romans wrote IX for nine. Roman numerals like IX are still used today to number chapters in books.

You can find the mysterious handcrafted glass pendant pictured above at NINE - Pendants and Focal Glass Beads (beadshaper.com)