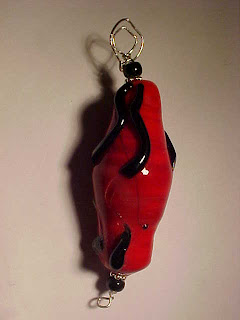 History of the Tango Dance

Tango began among the poor people in Buenos Aires in the 1800s. By the early 1900s it became popular among various people and spread to Europe. In the 1930s it developed into the Golden Age of Tango in Argentina and was a symbol of populism until a military coup in 1955 brought in a military junta which suppressed it. With the fall of the military junta in 1983, there was a tango renaissance which has lasted in Argentina until the present time. Tango has remained an exciting dance form throughout the world.
The bead pictured above handcrafted by the Beadshaper captures the fiery and sultry mood of the tango.
Posted by Rose Klapman at 6:51 AM No comments: 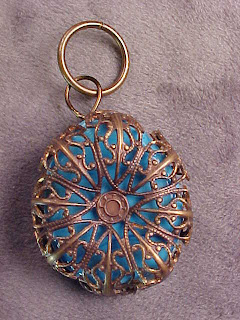 Filigree is the art of weaving fine wire into a lace-like pattern. The word comes from the Latin word for thread. Filigree began in ancient times among the Egyptians and other cultures. It eventually was taken up by the Greeks and later Romans who brought it to many areas that they conquered. The Greeks brought the skill to India which was at the eastern end of their empire. The Indians developed it into an important part of their art. Byzantium and Moorish Spain were particularly prominent in continuing the art during the Middle Ages. It has remained popular even to present times.


The Beadshaper will be selling focus beads embedded in filigree bezels to make beautiful pendants at her upcoming shows. See Beadshaper Shows
Posted by Rose Klapman at 8:53 AM No comments: