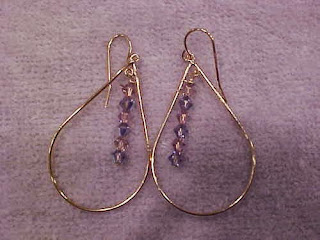 Crystals have been found in prehistoric graves and were known in ancient civilizations in Mesopotamia, Egypt, and India as well as among early Native Americans. The earliest crystals occurred as natural stones but early civilizations began making artificial crystals by adding lead to glass to give it brilliance. George Ravenscroft improved this method of making crystals in 1676. Daniel Swarovski invented a machine to cut crystals in1892. He moved his crystal company to the Rhine River in Austria where he used the river for energy to run his machines. The crystals he made were called rhinestones after the Rhine River. Now the word rhinestone is used to refer to any small leaded crystal.
BEADSHAPER

Posted by Rose Klapman at 8:41 AM No comments: 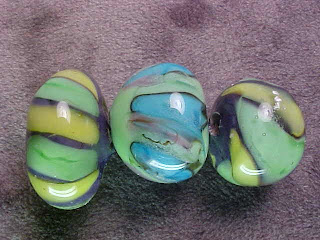 Beads have been used for religious purposes and for purposes related to superstition. Although the line between the two can sometimes be fuzzy, I would define religion as a belief in a deity (or deities) to give meaning to our temporary lives in an otherwise chaotic existence. Superstition deals with small disconnected issues. The use of beads in superstition assumes that they have some magical power to ward off evils. Beads in religion are tools to help in communicating with God (or gods). Anyway, beads can be beautiful in their own right, whatever their purpose.
So, having defined religion and superstition as well as I can, let’s go on to some of the history of beads in religion and superstition.

Prayer Beads in Religion
Prayer beads have been used at some time in most of the major religions in the world, including Christianity, Islam, Buddhism, and Hinduism. The English word bead comes from the Anglo-Saxon word bede which means prayer. In Islam beads are used in a string of 99 to count the attributes of God. In Hinduism and Buddhism the type of bead used is more important than the number. In Catholicicsm beads are strung in Rosary which represents a religious garden.

Evil Eye
Probably, the most widespread superstitious bead with a long history is the Evil Eye. This type of bead dates back to prehistoric times and has been found particularly in ancient Egypt, ancient Greece, Asia Minor, the Middle East, and Europe. The concept is that someone can cause you harm by giving you the Evil Eye. Beads shaped and colored to look like an eye were made to ward off this evil.

Other Ancient Civilizations
The Romans believed amber beads could ward off illnesses. A ram shaped bead was believed by some Middle Eastern civilizations to give strength.

Adder Beads
Adder beads were beads made of a glass-like material found in Britain since ancient times. The peasants believed that they were made by adders (poisonous snakes). They were believed to cure various ills in people and livestock as well as to help with difficult pregnancies

You can see modern day handcrafted glass beads at BEADSHAPER

Posted by Rose Klapman at 11:34 AM No comments: 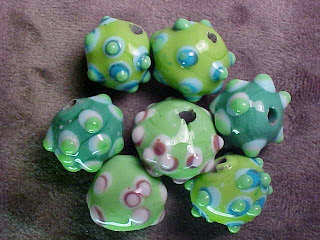 Beads have been involved in trade going back to prehistoric times. Excavations at Skhul in Israel found 100,000 year old small shells that were used as decorative beads. The location of the excavation was some distance from the sea where the shells were collected indicating that they were brought by someone to that location, possibly bartered. The beads had holes in them. If those holes were made by humans, this would indicate that they were probably strung and used for ornamentation. Similar shell beads have also been found in South Africa dating back 75,000 years and in Algeria dating back 30,000 to 90,000 years.
Beads in the earliest civilizations of Mesopotamia beginning with Sumer were more sophisticated and often were made of clay, metal, or semi-precious stones. Mesopotamia developed trade including beads with the other civilizations of the time, especially Egypt, but also Persia and India. The Mesopotamian crafters were known for their Carnelian beads. The Egyptian crafters were known for their lapis lazuli beads. Lapis stones were mostly mined in what is now Afghanistan and imported into Egypt where the raw material was made into beads and other objects. Bead making in China and in the Mayan civilization in the Americas developed independently. The Chinese were know for their jade beads. Beads made in the various places were carried to far away places over trade routes. As far as we know, the Mayans never were involved in the bead trade outside of the Americas because their civilization pre-dated the discovery of the New World by Columbus.
Glass bead making was developed in Egypt. The Phoenicians, who were active in trade, picked it up and transported it to other civilizations. Glass bead making was further developed in Greek and later Roman civilizations.
You can see modern day handcrafted glass beads at BEADSHAPER 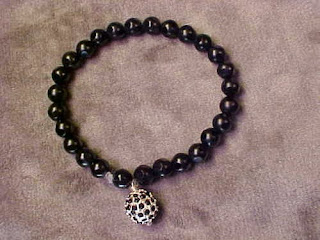 Onyx was popular with the Ancient Greeks and Romans. The Greek Onyx was of a number of colors, but the Romans used the word to refer only to the black variety (which is what we usually call onyx today) and a reddish brown variety called sardonyx. Onyx has been often been used in making cameos both in ancient Rome down to more recent times because it's softness is conducive to carving. The black color of black onyx is often enhanced by a dyeing process because of its porousness. Black onyx and black clothing were worn by Queen Victoria of England after the death of her husband, Prince Albert. This made onyx very popular in England in the late 19th Century. It has remained a popular stone for jewelry to this day.

Posted by Rose Klapman at 10:41 AM No comments: 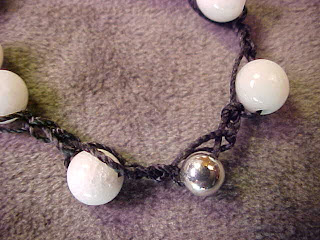 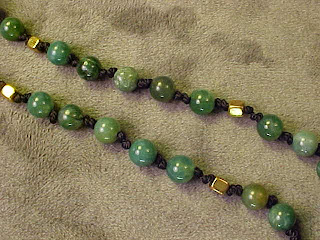 Jade is a stone that is most commonly green or white and has been used since pre-historic times for adornment, ceremonial purposes, and utilitarian purposes. It is usually associated with the Far East, especially China, but jade was also used in pre-Columbian Central America and in the Maori culture of New Zealand. Jade deposits were also found in Canada by Chinese immigrants in the 1880s.
Jade has been mined in various parts of China and surrounding countries since 6000 BC and was often brought to the Imperial Chinese court as tribute or in trade where artisans made it into various artistic objects. It was often considered more valuable than silver or gold and has continued to be prized for its beauty and value.
You can find some beautiful jade necklaces at BEADSHAPER

Posted by Rose Klapman at 8:45 AM No comments: 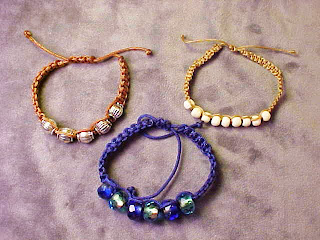 Macrame is the art of decorating with knots. Although macrame-like knots have been seen on carvings of ancient Mesopotamia, the art as it is known today began with Arabian crafters in the Middle Ages. It was brought to Spain by the Moors, and from there spread throughout Europe. Macrame was used to decorate shawls, towels, and other fabrics. It has become a technique in making jewelry in North America since the 1970s.
Rose will be featuring the art of making macrame bracelets in her classes at jewelry shows in California. See BEADSHAPER for details.


Posted by Rose Klapman at 6:15 PM No comments: 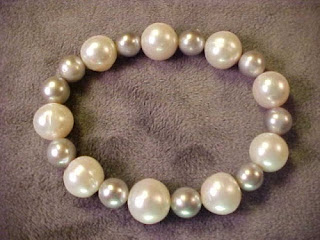 Pearls are calcified nodules that grow in mollusks due to an irritation of the inner lining of the shell. This irritation occurs infrequently which accounts for the rarity of natural pearls. Freshwater pearls come from mussels that live in freshwater. Saltwater pearls come from oysters that live in salt water. People realized even in ancient times that pearl production in mussels and oysters could be artificially induced, thus creating cultured pearls. The technique of culturing pearls was greatly perfected by Japanese pearlmakers in the early 20th Century and was particularly centered at Lake Biwa near Kyoto. The Lake Biwa pearl industry has declined in recent decades because of pollution in the lake, and China has become the major producer of cultured freshwater pearls.


In the bracelet pictured above, pearls and lampwork glass beads complement each other. Click Beadshaper to see more of the Beadshaper's jewelry creations.
Posted by Rose Klapman at 1:35 PM No comments: