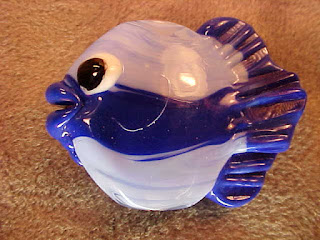 Parvati, in Hindu mythology, is the goddess of love. According to the story, she fell in love with Shiva, the warrior god who was living in the mountains as an ascetic. So she also went to the mountains to live the ascetic life in order to win his attention. Eventually she caught his attention, and he was attracted by her great beauty. They left the ascetic life and became married. Because of Parvati, Shiva mellowed and became the god of the arts as well as the warrior god.
The bead in the picture is one of the Beadshaper's Fashion Fish beads named for the beautiful Parvati. You can find the bead at FASHION FISH.

Posted by Rose Klapman at 8:03 AM No comments: 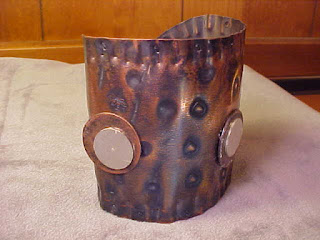 Bracelets date back to prehistoric times when bones, shells, seeds, pieces of wood, and stones were strung on cords of plant material. These beads were often thought to have protective power for the person wearing them. The ancient Egyptians developed bracelets into elaborate jewelry pieces with precious stones attached to gold and silver. The Egyptians wore bracelets to show their status in society and believed that when they died they would be place in the proper place in the afterworld according to their jewelry. The Romans made very elaborate designs in the metal of their bracelets. In Medieval Europe, Christians adopted many pagan customs of their ancestors including the wearing of protective amulets on their bracelets to ward off evil spirits. Charm bracelets became popular in Victorian times for decorative rather than utilitarian purposes. The popularity of bracelets for beauty continues to today.

The bracelet pictured above can be purchased at Metal Jewelry Shaper.

Posted by Rose Klapman at 6:35 PM No comments: