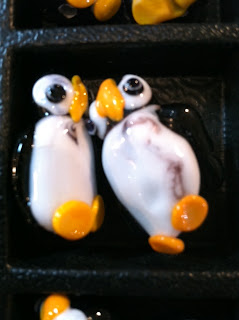 Penguins live in the southern hemisphere. Larger penguins live in and near Antartica. Smaller penguins live in warmer climates as far north as near the equator. Penguins were first discovered by European explorers when they sailed south below the equator. The word penguin comes from the French word pingouin which is the word for auk. The great auk was a large bird that looked somewhat like the penguin and lived in the northern hemisphere. The great auk became extinct by the middle of the 19th Century because it was over hunted.
The glass penguin beads pictured above are part of large collection created by the Beadshaper and presented at shows in Pasadena and concord, California this summer.
Posted by Rose Klapman at 10:08 PM