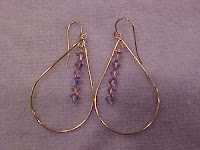 Crystals have been found in prehistoric graves and were known in ancient civilizations in Mesopotamia, Egypt, and India as well as among early Native Americans. The earliest crystals occurred as natural stones but early civilizations began making artificial crystals by adding lead to glass to give it brilliance. George Ravenscroft improved this method of making crystals in 1676. Daniel Swarovski invented a machine to cut crystals in1892. He moved his crystal company to the Rhine River in Austria where he used the river for energy to run his machines. The crystals he made were called rhinestones after the Rhine River. Now the word rhinestone is used to refer to any small leaded crystal.
For beautiful jewelry click www.beadshaper.com
If you would like to leave a comment, please click the link below. I would love to hear from you.
Posted by Rose Klapman at 8:42 AM