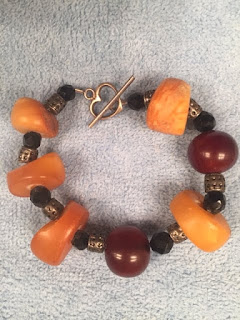 Beads have been used in trade for centuries, particularly in the Middle East and Africa. “Amber" beads are highly prized in certain African cultures as status symbols. They are often included in the dowry which a woman brings into a marriage. The beads do not necessarily have to be natural amber. Natural amber is millions of years old petrified resin from trees. While we usually draw a distinction between natural and manufactured, to many African people manufactured amber-like beads impart the same status as natural amber. An interesting history has developed concerning Bakelite African ambroid beads. Dr. Leo Baekeland (1863-1944) was born in Belgium and migrated to the USA in 1889 at the age of 26. He invented Bakelite, the first true plastic, in 1907 by combining phenol and formaldehyde. He then formed the Bakelite Corporation which manufactured Bakelite. Dr. Baekeland was president of Bakelite from 1910 to 1939. When the Bakelite Corporation’s patent ran out in 1927, other companies started producing phenol/formaldehyde plastics. For a time, the word bakelite was used by many people to refer to any similar plastic. Bakelite was used to manufacture many products including beads and jewelry. It was made in various colors, one of which was an amber color which resembled natural amber. Bakelite was used in making jewelry that was produced in America and Europe for domestic sale in the early 20th Century (especially during the Depression when formerly wealthy people wanted more affordable jewelry), but it was also sold in Africa where the amber-like variety was very popular. During World War II, bakelite jewelry was no longer made because the material was needed to make products for the military.
Today, bakelite products manufactured in the early 20th Century, particularly beads and jewelry including those used in the African trade, are valued as antiques and collectibles. Rose has acquired a number of those antique African amber-like bakelite beads which she has incorporated into African ambroid jewelry which are available for sale on her web-site at

You can purchase the bracelet in the photo above at african ambroid bracelet (beadshaper.com)
If you would like to leave a comment, please click the link below. I would love to hear from you.
Posted by Rose Klapman at 8:41 AM