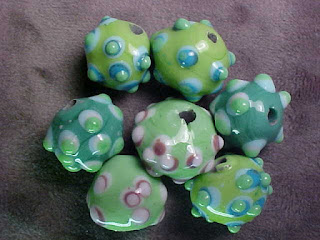 Beads have been involved in religion for millenia. The English word "bead" is derived from the old Anglo-Saxon prayer or request (as in the German word "bitte"). Archeologists have found glass beads in the graves of early Medieval Anglo-Saxon graves. The earliest religion to have used beads extensively appears to have been Hinduism from which the use of prayer beads passed to the other major Eastern religion Buddhism . Hindu and Buddhist prayer beads are called mala. They are often in strands of 108 beads representing the 108 obstacles one must overcome to reach Nirvana or Heaven or Enlightenment. In some religious groups, only monks use 108 beads while lay people use only 30-40 because less is required of them. Devotees of the Hindu god Shiva use beads made of a particular seed. Devotees of the Hindu god Vishnu use carved wooden beads. Buddhist beads were originally made of seeds and wood from the bodhi tree but subsequently have become made of various materials as Buddhism has spread to various countries. Later in the early Middle Ages the use of beads in prayer spread to Islam and Christianity. Islamic prayer beads are known as subha (from the Arabic word for "exalt"). Each strand of Roman Catholic prayer beads is known as a rosary because the rose in Roman Catholicism represents perfection. Interestingly, Judaism does not use prayer beads. Judaism does use cloth fringes on the corners of prayer shawls, but this comes from the Bible directly and is not related to the bead tradition.

You can see various glass beads handcrafted by the Beadshaper at http://www.beadshaper.com
Posted by Rose Klapman at 5:00 PM