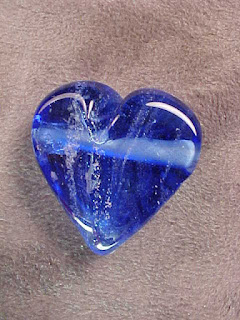 Modern dichroic glass is made by depositing layers of metallic oxides onto glass in a vacuum chamber. These layers act like prisms to refract light making an irridescence. Lampwork artists incorporate bits of dichroic glass into their glass beads to create dichroic accents.
The earliest forms of dichroic-like materials occurred as natural phenomena going back to prehistoric times. The first man made dichroic-like glass was created in ancient Egypt and Mesopotamia by fusing glass. The modern dichroic process was first developed in the 20th Century for use in photography and in the aerospace industry. Later, in the 1990s, glass artists became aware of it and began using it in glass art because of its beauty. Since then it has become one of the most popular modalities for accenting glass beads.


HOME Click here to return to the Home Page.
Posted by Rose Klapman at 11:20 PM