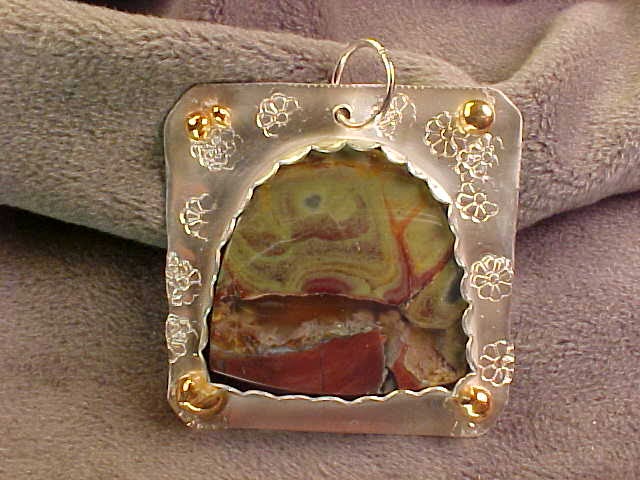 Agate is a stone containing layers of quartz. The layering of quartz often occurs in crevices of volcanic rock. Various agates are of various colors and forms, and are found all over the world. Theophrastus, an ancient Greek naturalist, is credited with first describing agate about 5 thousand years ago.
Agate was discovered near the Nahe River in the towns of Idar and Oberstein about 6 hundred years ago or earlier which resulted in the towns becoming important gem cutting centers. Later when all the agate in the area had been mined, the gem cutters imported agate from elsewhere, particularly Brazil, and continued being a gem cutting center.
The silver pendant pictured above features an agate stone and can be found at Metal Jewelry Shaper.
Rose (the Metal Jewelry Shaper) will be teaching classes in various metal jewelry making techniques at the Bead and boutique Arts show at the Concord Hilton hotel in Concord, California February 28 through March 2, 2014. See Metal Jewelry Classes for details.