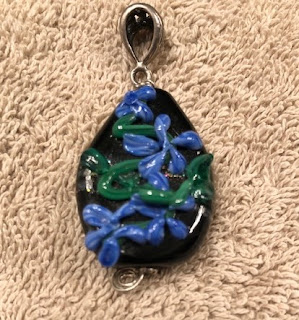 A bail in jewelry is a loop which can connect 2 parts of a jewelry piece. In a pendant necklace it is at the top of the pendant or at the bottom of the necklace. The earliest known image of a human being and probably the earliest known bail is a statue discovered in Germany in 2008 known as the Hohele Fels figurine which is estimated to be 40,000 years old. There is no head, but at the top of the body there is small loop. This loop is possibly a bail through which a cord could be threaded making a necklace. It is possible that the head is not present because it might have been made of a perishable material that disintegrated over the years.

The picture above is of a handcrafted lampwork glass bead crowned with a silver bail in which one can thread a chain or cord to make a pendant necklace. It can be purchased at BLUE FLOWERS AT NIGHT GLASS PENDANT WITH BAIL