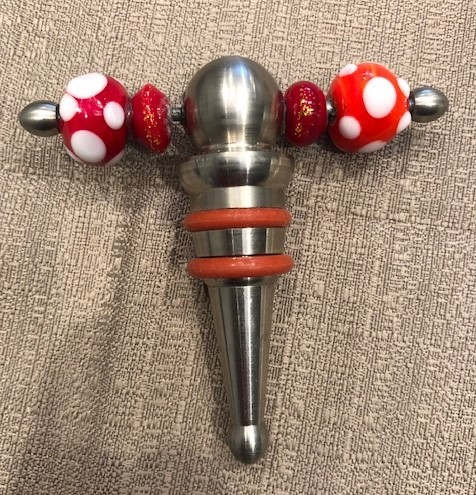 It has been known since ancient times that wine that is stored over time has to be protected from the air to prevent spoilage by oxygenation. The ancient Egyptians used clay to seal their wine bottles. The ancient Greeks and later Romans stored wine in vase shaped vessels called amphora. We don't have examples of the stoppers which were used to seal them because the stoppers were made of perishable materials. A French monk named Dom Perignon started the widespread use of cork as a stopper for wine bottles in 1698 which is still commonly used today.
Bottles made of various materials known as decanters have been used for serving wine since ancient times. The ancient Romans began making decanters out of glass, and the Venetians reintroduced the concept of making decanters of glass during the Renaissance. The English in the 1700s began using glass stoppers. Once the cork is removed from a bottle it is difficult to put it back in. Today, wine stoppers used after the cork is removed are often made of glass or metal. Elaborate wine stoppers are often decorated with glass beads or other adornments.
The wine stopper pictured above can be purchased at RED BEAD BOTTLE STOPPER - Beaded Tools - Handcrafted Lampwork Glass Beads, Pendants, and Wirewrap, Viking Knit, and Bead Crochet Jewelry. (beadshaper.com)
If you would like to leave a comment, please click the link below. I would love to hear from you.
Posted by Rose Klapman at 6:04 PM