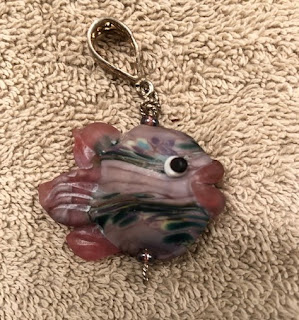 Fish scales were used in primitive times because of their availability (byproducts of cleaning fish for eating) and beauty (shiny and at times colorful). The whole fish as a symbol originated in various cultures. The fish was worn as a symbol of fertility and birth in various pagan cultures, including the ancient Egyptians, Romans, Greeks, and Celts, as well as others). The ancient Polynesians wore fish hooks as jewelry to symbolize prosperity and health because, as island people, they derived those benefits from the ocean. This custom has been particularly popular among the Maoris of New Zealand and has been continued in the Hawaiian culture. The fish is popular in Christian jewelry. It was a secret symbol used by the ancient Christians in Roman times to identify each other. They consider fishing a symbol of missionary activity, but the pagan Romans did not detect it as such because it was also a pagan symbol.You can see beautiful flamework glass fish beads for jewelry making at SANDY STRIPES FISH PENDANT WITH BALE (beadshaper.com)
If you would like to leave a comment, please click the link below. I would love to hear from you.
Posted by Rose Klapman at 8:45 AM