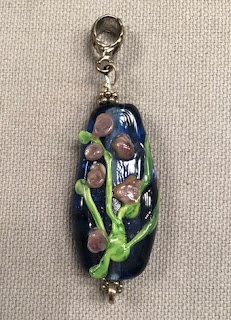 Adornment with flowers goes back to ancient times. The ancient Egyptians  depicted some of their gods as wearing plumed headdresses. The ancient Greeks and Romans wore flowers in their hair as individual flowers and in garlands, especially at weddings. The art of wearing flowers in the hair also is found in the cultures of India and Polynesia. Artifical flowers go back to ancient times and were mentioned in the Bible in the chapter concerning King Solomon and the Queen of Sheba. Flowers were used to decorate churches in the Middle Ages in Europe, natural flowers in the summer, artificial flowers made by nuns in the winter. Flower making for hats and clothing began as a commercial venture in France in the 18th Century and then spread to Germany.

Millefiore is a technique of applying small thin flowers to glass beads, pendants, and other glass objects. This technique dates back to ancient Greece, Rome, and Phoenicia. It was perfected by the Venetians in their beadmaking beginning in the Middle Ages. The word millefiore means thousands of flowers.
Harvard's Botanical Museum in the 19th Century commissioned Leopold and Rudolph Blaschka in Germany to make glass plants and flowers for the purpose of teaching botany. This collection was made during the period of 1887 to 1939. It remains today as a classic collection of glass plant models and is known for its exactness. In recent times the making of glass beads in the shape of flowers has become very much in style.

You can see examples at www.beadshaper.com/gallery?category.