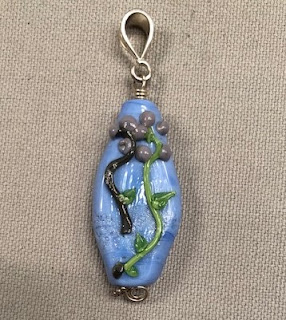 The Garden of Eden is mentioned in the Book of Genesis in the Bible as well as elsewhere. It is described as an idyllic place where the first humans, Adam and Eve, lived with immortality until they were tempted to sin by eating the forbidden apple and then became mortal. There are various ideas about where Eden might have been although one could say there is no specific location if one considers the story of Eden to be allegorical rather than historical. The ancient Hebrews probably placed it somewhere east of Mesopotamia although that is not clear. In relatively recent times the Mormon religion, which is very North American centric, placed it in Missouri. Wherever the location or if there was a location, the story of Adam and Eve and their expulsion from Eden was a way for the ancients to explain human mortality, a problem that has bothered people from before the dawn of history and even today.

You can find the floral garden pendant bead pictured above at http://www.beadshaper.com/detail?item_id=43062&category_id=1764