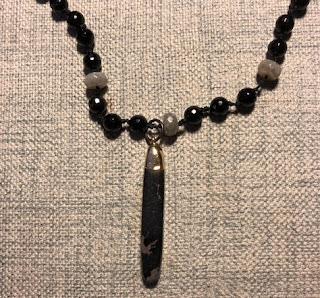 The color black is the absence of light. It is the color of the night. A black objects absorbs all the light it receives and reflects none of it back to the eye of the beholder. Black has been a popular color in the design of varous objects going back to prehistoric times. Black ceramic objects have been found that were estimated to have been made as long as 25,000 years ago. To the ancient Egyptions, black was the color of the silt that came from the Nile River annually which enabled them to grow food there and was the reason that Egyptian civilization grew in that location. Therefore the Egyptians associated black with fertility and rebirth. There was a type of pottery made in ancient Greece, particularly between the 7th and 5th Centuries B.C., in which the figures were painted black and set against a background of a lighter color. Black diamonds are a rare form of the gem which have been worn as long ago as the Middle Ages in Europe. Black glass was first produced in England in the 1600s and is often due to iron oxide impurities. Black clothing in western civilization has often been worn during periods of periods of mourning, as a sign of conservatism, or as a sign of importance and power. It was a popular color for clothing among the Puritans. The ceremonial clothing worn by Christian and Jewish clergy is often black. Tuxedos worn at weddings and other formal affairs are often black. It was worn by Queen Victoria of England during the many years of her life after Prince Albert died, and therefore was popular color in Victorian England. In modern times, a black dress is thought to make a woman look thinner and is believed by many to look sexy.

You can find an exotic black pendant necklace on the Beadshaper website at Romantic Night Black Pendant Necklace (beadshaper.com)

If you would like to leave a comment or send a note to a friend, please do so by clicking the link below.
Posted by Rose Klapman at 8:46 AM