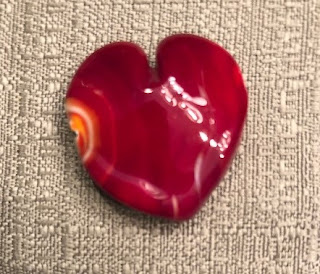 Red is one of the 3 basic colors. It is the color of blood and for that reason has been associated with the origin of life going back to prehistoric times. Prehistoric cave painters used red in painting animals. Red was often considered to have protective properties. Red material was at times buried in graves to protect the dead. Ancient hunters and warriors at times painted their spears with red blood. Red bedding was thought to be able to prevent illness. Red wedding clothes were at times worn by various ancient cultures including Rome, China, and others. The Medieval Christian Church used red in clerical garments and associated red with the cross. Red was a popular color for painting houses in Victorian Times although clothing at that time tended to have drab colors. In modern times, it is not unusual to find red in women's clothing and accessories although not often in men's clothing. Red is and has been a bright attractive color in glass beads even up to today.