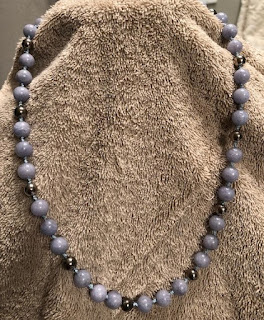 Prehistoric necklaces were often made of bones and shells on a string. Gold necklaces appeared in Mesopotamia about 2500 BC and stones were added around 2000 BC. Gold collars were worn by wealthy and noble men and women in ancient Egypt. Persian nobility wore pearl necklaces around 500 BC. Pendants were popular in Greece during the classical period 500-300 BC. Gold became prevalent in Greek necklaces during the Greek empire period after the time of Alexander the Great. The Etruscans in Italy wore gold necklaces going back to the 8th Century BC. The Romans at first discouraged the wearing of jewelry, but later started wearing necklaces with gemstones after the 1st Century AD. Jewelry was discouraged in early Medieval Europe, but choker and long necklaces, often made of pearl chains with pendants consisting of gems or metal crosses became fashionable in Renaissance times. Necklaces in Asia were worn since ancient times. Indian necklaces were known for silver filigree, silver beads, precious and semi-precious stones with different styles in various regions. The Aztec nobility in pre-Columbian Mexico wore necklaces of gold beads in the form of animals. The Hawaiian islanders have worn flower necklaces for centuries.
To see many beautiful necklaces hand crafted by the Beadshaper, click  www.beadshaper.com/gallery?category_id=1576

If you would like to leave a comment or send a note to a friend, please do so by clicking the link below.
Posted by Rose Klapman at 7:26 AM