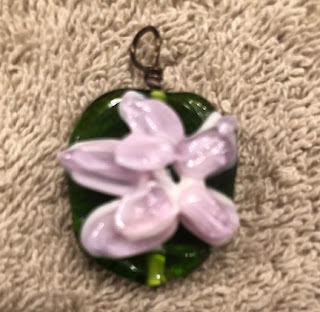 Plants have been producing flowers for millions of years as evidenced by flowers found in fossils producing natural flower designs. Prehistoric cave art usually depicted animals rather than plants. The ancient Egyptians had access to a variety of flowers because of the lush Nile river valley in which they lived. Flowers were worn as decorations and were also used to adorn their animals and chariots. The Egyptians started making glass beads with floral designs around 1200 BC. The ancient Greeks and later the Romans used flowers in their garlands and wreaths. They also further developed the art of floral design on beads and jewelry. The Byzantines later added fruit to the flowers in their wreaths. Flowers were used extensively in tapestries and rugs in the Moslem world during the Middle Ages. Floral design was found extensively in ancient Chinese and Japanese pottery to the present time. Greek and Roman art were shunned in most of Europe during the Middle Ages, but Greek and Roman flower art returned in the Renaissance period. The Venetians revived and further developed the art of flower design on glass beads and other glass art. The S shaped stem became popular in floral design during the Baroque period and has remained popular today. Floral designs became elaborate during the Victorian period. Flower arrangement continues to evolve and remains popular in our time.

You can see a number of handcrafted lampwork glass pendant beads adorned with glass flowers in the PENDANTS AND FOCAL GLASS BEADS gallery at www.beadshaper.com/gallery?category_id=1764

If you would like to leave a comment or send a note to a friend, please do so by clicking the link below.
Posted by Rose Klapman at 8:39 AM