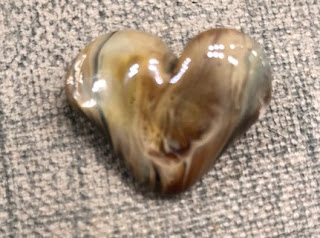 The Earth apparently began about 4 ½ billion years ago and was probably original hot gas at that time. It was then molten as it was cooling down, then a solid crust with liquid water on the surface, and a surrounding gas atmosphere. The earliest life appeared about 3 1/2 billion years ago. Photosynthetic life (plants) about 3 billion years ago began to insert oxygen into the atmosphere which later allowed the beginning of multicellular life. Vertebrates and other complex life began in the past ½ billion years. Since then, land animals, insects, reptiles, birds, mammals, and ultimately humans have appeared. Early forms of humans began about 200,000 years ago and humans as we know the species today in the past 100,000 years.

You can visit a lampwork glass heart-shaped bead with earth colors and named after the Earth at HEART OF THE EARTH GLASS FOCAL BEAD (beadshaper.com)